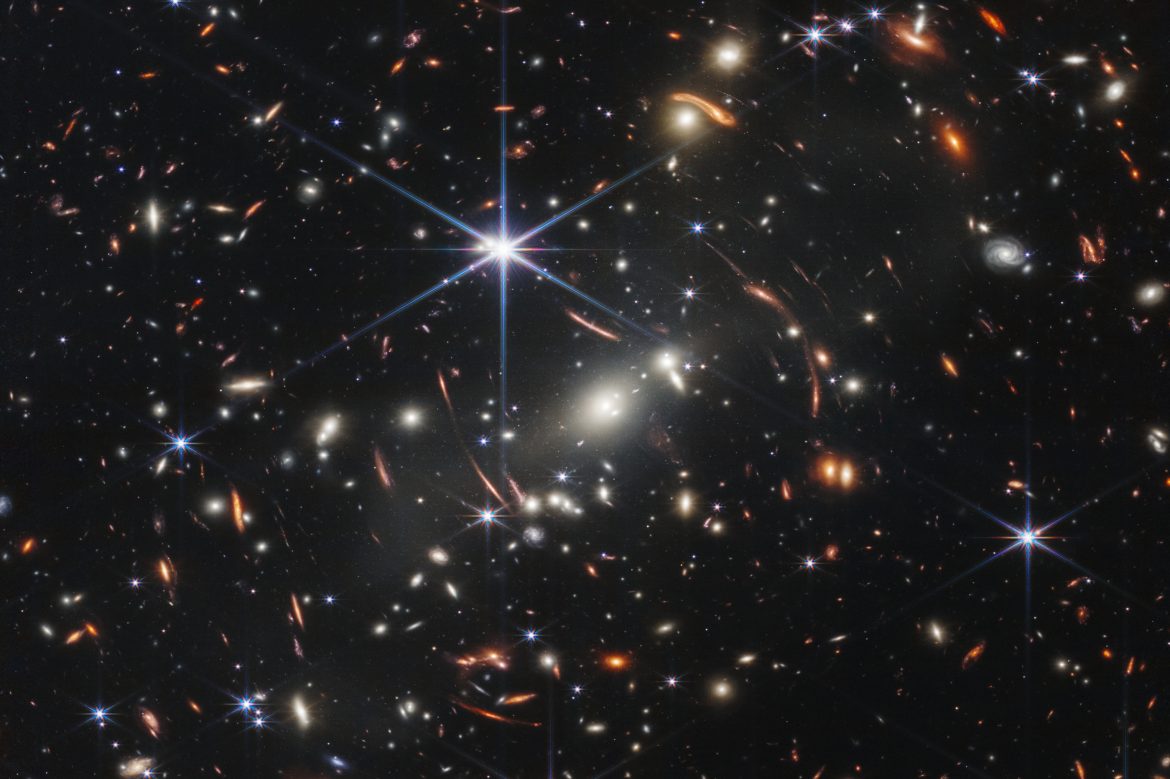 After decades of delays and billions of dollars over budget, NASA has officially released the first scientific photographs of the James Webb Space Telescope, a partnership with ESA (European Space Agency), and CSA (Canadian Space Agency).

Selected by an international committee of representatives from NASA, ESA, CSA, and the Space Telescope Science Institute, these images represent the first portion of full-color scientific images and spectra collected by the observatory, and the official beginning of Webb’s scientific operations.

These first images from the world’s largest and most powerful space telescope, whose planning and construction has been going on since the 1990s, strongly reflect that Webb is ready to begin the mission to reveal the infrared universe. 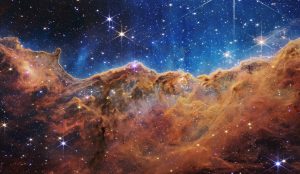 This shimmering star-studded landscape of “mountains” and “valleys” is actually the edge of a nearby, young, star-forming region called NGC 3324 in the Carina Nebula. Captured in infrared light by the James Webb Space Telescope, the image reveals for the first time previously invisible areas of star birth.

This seemingly three-dimensional image by James Webb, called the Cosmic Abyss (the view of distant objects not as they are today, but as they were back in the Universe’s past), resembles craggy mountains on a moonlit evening. In reality, this is the edge of a giant gaseous void inside NGC 3324, and the tallest “hills” in this image are about 7 light-years high. The cloudless region is carved out of the nebula by intense ultraviolet radiation and stellar winds from extremely large, hot, young stars at the center of the bubble, slightly above the area we see in this image.

The faint star at the center of this scene has been sending rings of gas and dust in all directions for thousands of years, and NASA’s James Webb Space Telescope has revealed for the first time that this star is surrounded by a cloud of dust.

Two cameras on Webb captured the latest image of this planetary nebula about 2,500 light-years away, cataloged as NGC 3132 and informally known as the Southern Ring Nebula.

The image on the left is from Webb’s Near Infrared Camera (NIRCam), where stars and their layers of light stand out; while the image on the right is from the Middle Infrared Instrument (MIRI), which reveals for the first time that the second star is surrounded by dust. The brighter star is still at an earlier stage in its evolution and will possibly have its own planetary nebula in the future.

The five galaxies of the Stephan’s Quintet are also known as Hickson Compact Group 92 (HCG 92). Although they are called a “quintet,” only four of the galaxies are actually close together and caught in a cosmic dance. The fifth and leftmost galaxy, dubbed NGC 7320, is quite prominent compared to the other four. While NGC 7320 is located 40 million light-years away from the Earth, the other four galaxies (NGC 7317, NGC 7318A, NGC 7318B and NGC 7319) are about 290 million light-years away. Compared to more distant galaxies billions of light-years away, this is still pretty close in cosmic terms. Studying relatively close galaxies like these helps scientists better understand the structures seen in a much more distant universe. 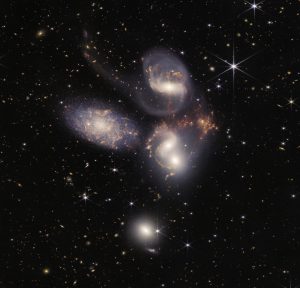 This proximity gives astronomers the chance to witness from the forefront the mergers and interactions between galaxies that are crucial to galactic evolution. Scientists are rarely able to see in such detail how interacting galaxies trigger star formation in each other and how the gas in these galaxies decays. Stephan’s Quintet is a great “laboratory” to study these processes fundamental to all galaxies.

Webb’s first Deep Field, the galaxy cluster SMACS 0723, contains thousands of galaxies, including the faintest object ever observed in the infrared.

Webb’s image is a tiny fraction of the vast universe, about the size of a grain of sand held at an arm’s length. he combined mass of this galaxy cluster acts as a gravitational lens , magnifying more distant galaxies, including some seen when the universe was less than a billion years old. Captured by Webb’s Near Infrared Camera (NIRCam), this deep field is a composite made from images at different wavelengths, totaling 12.5 hours – achieving depths at infrared wavelengths beyond the Hubble Space Telescope’s deepest fields, which took weeks.  Researchers will continue to use Webb to take longer exposures to reveal more of our universe.

This image shows the galaxy cluster SMACS 0723 as it was 4.6 billion years ago, with many more galaxies in front of and behind it. The lensing effect created by the galaxy’s strong gravity around SMACS 0723 at the center of the image can be seen as bent and twisted shapes. The strong gravitational field of a galaxy cluster can bend the light rays from more distant galaxies behind it, just as a magnifying glass bends and warps images.

Webb’s MIRI image presents different colors, highlighting wherever there is dust, the key ingredient for the formation of stars and ultimately life itself. Blue galaxies contain stars but very little dust, while the red objects are covered with thick layers of dust. Green galaxies are full of hydrocarbons and other chemical compounds. Researchers will be able to use such data to understand how galaxies form, grow, and merge with each other, and why they stop forming stars altogether in some cases.[/vc_column_text][/vc_column][/vc_row]