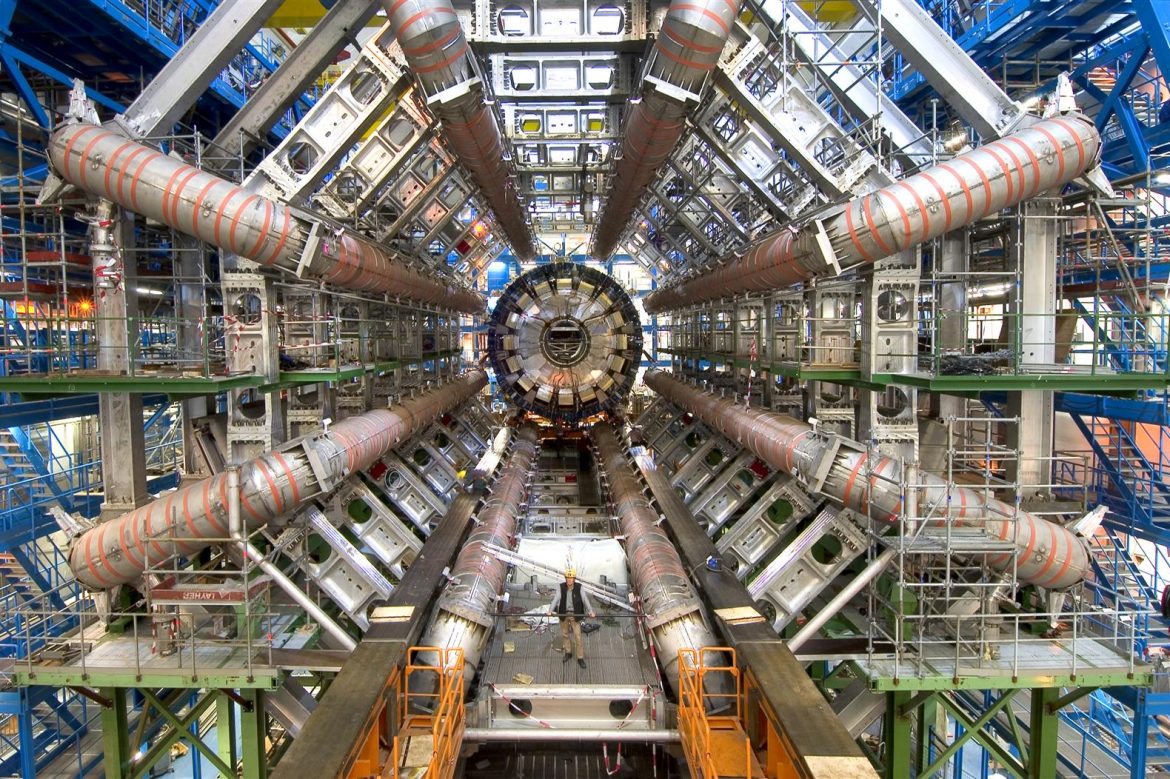 Having made history  three years ago by teasing out the elusive Higgs boson which gives the particles their masses, the Large Hadron Collider (LHC)  is set for carrying physics to beyond the Standard Model despite a last-minute snag which caused “Oh, no! Again?” laments across the scientific world. It is going to do that by re-creating the conditions prevalent in the first instants after the Big Bang which gave rise to the universe. Following an extensive, two-year overhaul, the collider, already cooled to the lowest point, was to start injecting protons into parallel tubes on February 25, to counter-circulate and accelerate them to the threshold of light speed to collide them later in gigantic particle detectors. But a short circuit at an electrical contact on one of the powerful superconducting magnets had caused a postponement.  Finally, CERN officials announced that the metal particle causing the short-circuit had been burned off by a brief pulse of powerful electric current and that LHC was operational once again. The collision of protons inside the detectors, however, is scheduled to start in May after the counter-circulating beams re accelerated to near light speed. In 2008, the start of the first run was also overshadowed by a more serious accident which caused coolant lost and damage to a number of hi-tech superconducting magnets. Following an eight-month repair, LHC’s power for the first run was tuned down to half the design capacity of 14-TeV.

Discovery of the Higgs particle, the missing link of the Standard Model  which explains the sub-atomic forces of nature, the strong nuclear force, weak force, and electromagnetism, was announced on July 4, 2012, bagging the 2013 Nobel Physics Prize for theorists who predicted it.

The collider, run by European Nuclear Research Center CERN, is installed in the famous 27-kilometer ring-shaped tunnel under the French-Swiss border. LHC was originally designed to collide counter-circulating protons, shepherded by superconducting magnets – each 15 meters long and weighing 35 tons – and accelerated to near light speed, at energy of 14 trillion electronvolts (14 TeV). The particle jets emerging from the ball of energy created when the protons smash head-on, are sifted and analyzed by four monstrous detectors. But LHC’s power was trimmed to half after an accident just nine days into its inaugural run brought it to a halt, necessitating an eight-month repair. Before it was shut down for improvements two years ago, the collison energy was kept down to 7 Tev, to be eventually increased to 8 TeV.

To New Horizons with Full Strength

In the current phase, LHC will collide protons at the 13 TeV energy level and will step into the unknown to grope for particles predicted by theories seeking to extend the Standard Model.  This energy level is tens of times the masses of both the Higgs particle and the Top and Bottom quarks, which are the heaviest particles in the Standard Model (according to Einstein’s famous E=mc2 equation mass is also a form of energy).

To bolster the chances of a discovery, CERN technicians also target boosting the number of proton collisions in the beams passing through each other from 360 million per second to 700 million as the “interesting events” are seen only in rare head-to-head collisions.

Another priority task for LHC in the new operation phase will be analyzing the Higgs particle to characterize its properties and shed light on the still obscure mechanism with which it gives their mass to Standard Model particles. What fuels the optimism of accelerator physicists is the expectations that with its boosted power, LHC will increase the number of netted Higgs particles tenfold.

In the physics community, the 125-GeV (Giga or billion ellectronvolt) Higgs boson announced in July 2012 is referred to as the “light Higgs.” For, some of the theoretical extensions of the Standard Model predict the existence of other, heavier Higgs particles. LHC will seek to snare these heavyweight s if there are any.

Of these theories, the one called “supersymmetry” (SUSY) also hypothesizes a set of particles which are among the LHC’s targets drawing widest interest.  The theory assumes the existence of a heavier (hence “super”) partner for every known particle. If the familiar particle is a fermion, or matter particle, the partner has to be a boson that is a force-mediating particle. For instance, whereas  the photon, the boson mediating the electromagnetic force also known as the “light particle” does not have a mass, its supersymmetric partner (photino) is thought to be a heavy  fermion with a mass in the range of tens, or even hundreds of billion electronvolts. The superpartners of fermions are named with the addition of an “s”, alluring to supersize, to the name of the familiar particle (Eg: quark-squark; electron-selectron). The partners of the force mediating particles, get an “ino” suffix to the names of known bosons (photon-photino, W-Wino, Z-zino, gluon-gluino, Higgs-Higgsino).

The physicists who will hunt for supersymmetric particles in the new run of LHC are expected to focus their attention on “Stop kuark”, the hypothetical superpartner of Top quark, the heaviest of the Standard Model particles. That’s because it’s theorized that the Top is the particle most affecting the Higgs mass.

Will Dark Matter Come Under Spotlights?
A phenomenon requiring a “new physics” paradigm beyond the Standard Model and the general relativity which explains the gravity which the former leaves out, is the inferred presence of a mysterious “dark matter” making up 85 percent of all the matter in the universe. The particles of this enigmatic matter which makes its presence felt through gravity, have not been observed in collider labs to date. Forerunners among hypothetical candidates are those called Weakly Interacting Massive Particles, or WIMPs, which are thought to pack masses 10 to 1000 times that of a proton (whiich has a mass of roughly 1 billion electronvolts or 1 GeV). Another candidate is one called axion, a particle one-trillionths the mass of the electron (0.5 million electronvolt – MeV).
Many physicists believe these particles may show up in the huge collision energies LHC will produce. Even then, they will not be directly observed and their presence will be inferred from their distinct signature. In special proton-proton collisions which accelerator physicists call “mono-X” events, it is thought that particles or jets of debris will be spewed in only one direction, with nothing to be seen on the opposite side. That’s because it’s hypothesized that part of the collision energy will be taken away by dark matter. But some physicists do not rule out other, more complex signatures of dark matter.

Will the data flowing from the new phase of LHC’s operations change the physics resting on quantum mechanics and general relativity and alter the picture of universe in our minds? Shall we dump our physics books and wait for new ones to be written from scratch?

Particle physicists appear divided on the question. Some see the fact that nothing had been found other than the Higgs over the past three years of operation as portending an empty basket for the future, too. The pessimists fear that non-detection of signs for the “new physics” may sap the interest in LHC and accelerator physics.

In the optimist camp, however, the expectations are high that with its new muscle mass, LHC will carry the Standard Model forward. Pointing out that with ever-new improvements the LHC will remain in service until 2035, CERN officials and scientists from several collaborations clustered around the major detectors preserve hopes for exciting new discoveries.

For LHC to attain the 13 GeV energy level in the new phase, it ihas to be powered by an electric current of a whopping 13.000 amperes. That’s because increasing the energy levels of proton beams call for stronger magnetic fields to keep them in stable orbits. And that, in turn, requires the flow of more powerful electric current through the superconducting coils of the magnets which provide the magnetic field. The ability of coils around the magnets to carry an 13.000-ampere current is only possible if  they are made of superconducting wires with zero electrical resistance.  Superconductivity, on the other hand, calls for temperatures as low as a few degrees above the absolute zero (-273.15°C).  Hence, the magnet coils have to be cooled with liquid helium to-271°C.

To ensure the smooth operation of the world’s largest physics machine, each of the 1232 magnets and their 10,170 electrical connections, which navigate the positively charged protons and enable them to make perfect loops in their rings, were inspected one by one to make them answer the demands of a nearly doubled energy level.

Why Not Full Capacity?

LHC is a collider to smash protons at an energy level of 14 TeV.  So why is it that it’still not raised to its design capacity? The reason is connected with the “training” of the magnets. If there is a slightest energy leak to the supercooled magnets (as tiny as the amount imparted to the floor by a small coin dropped from a height of 5 cm,) may heat the coils and disrupt their superconductivity. When that happens, the electricity in the coil has to be rapidly discharged, a process which is called a “quench”.  After a superconducting magnet is installed in its place, it has to be trained to function smoothly at the required current level.  For that, they are fed higher and higher levels of current, starting anew after each quench. Initially quenching at low current levels, magnets eventually attain the required performance levels. But when the machine is turned off for extended periods and magnets are not cooled, the whole training procedure has to be repeated. And although they start quenching at higher current levels than before, they also quench before reaching their former top performance with their slightly eroded memories. So they have to be re-trained to climb back to higher rungs of the ladder without quenching. While magnets can be re-trained to cope with the high currents required for the 13 TeV energy level with relative ease, longer time is necessary to train them for handling current levels for 14 TeV. So, CERN officials decided to start the LHC’s second run with the 13 TeV energy level, leaving the decision to go to 14 TeV to a later date.