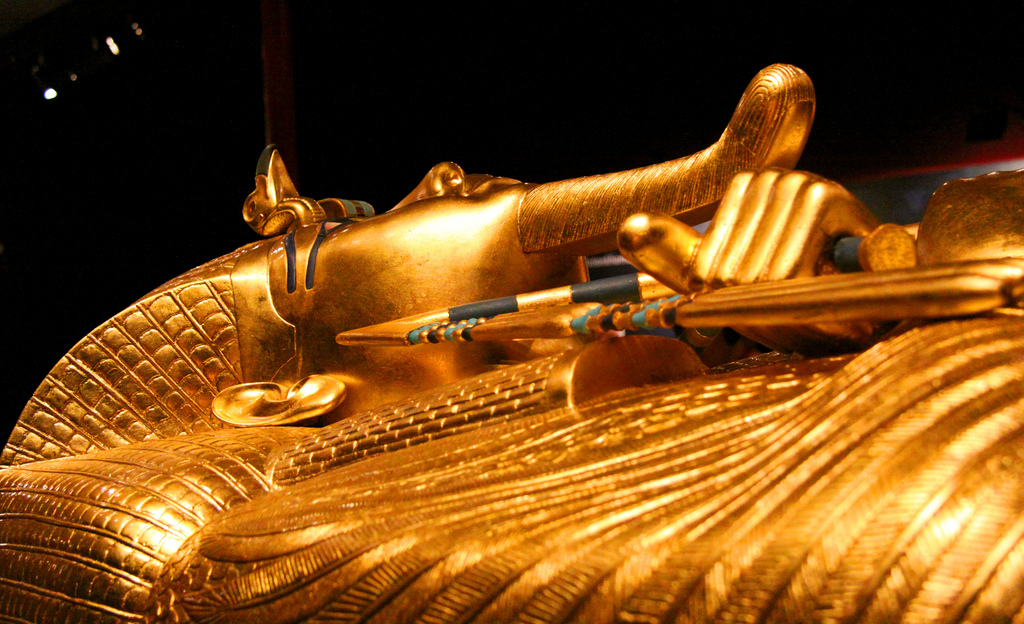 How Do We Know What King Tut Looked Like?

Forensic science brings kings, victims back from the dead

Have you ever wondered how an artist’s impression of Tutankhamun’s feminine facial features can be anything more than a stab in the dark? Or how historians know that Dante wasn’t as ugly as rumored? Or how we’d make out Genghis Khan’s face if we ever find his tomb site?

It seems the answers are written in bone.

Your fleshless skull can tell the experienced eye of a reconstruction artist more about your face -and lifestyle- than you might have thought.

The process of facial reconstruction has thus far remained surprisingly hands-on despite the advance of digitalization and computerized technology. It still involves sculpting plasticine and a sizable measure of creative estimates. So much so that some experts prefer the term “facial approximation” to “facial reconstruction”-since it’s often their best educated guess.

Joe Mullins, a forensic facial reconstruction professor at George Mason University in Virginia says it’s a process of art and science. “It’s a wonderful and necessary dichotomy,” he adds.

Mullins also works as an imaging specialist for The National Center for Missing and Exploited Children, which provides assistance to law enforcement agencies in finding missing children. Part of that includes projecting what a child may look like based on a photo taken when they were abducted many years ago. That is a different process, and one less reliant on science, compared to reimagining the face of an unidentified skull for the police or the exhumed remains of a famous king from a bygone era.

Sculpting a recognizable face from an ancient skull is not a fast sequence of events. “The whole process takes about a month from skull to silicone cast,” explains Michael Anderson from the Yale Peabody Museum of Natural Science History. “It takes another month or two to add hair,” he says.

In the process of reconstructing faces, Anderson says you can learn a thing or two about the person’s past life. “Sometimes there are wounds that show up on the skull or indications of certain diseases like syphilis or rickets,” he explains, “Malnutrition can show up as a pinning in the skull -all of this gives you an idea of the final look of the face.”

When National Geographic produced their reconstructed face of King Tutankhamun, they asked Anderson for a second opinion. He built a second version without seeing the first, which allowed them to compare and contrast their results to make sure they published an accurate rendering of the boy pharaoh.

Mullins and Anderson explained the facial reconstruction process from skull to image to Kurious.

Before any sculpting can begin, it’s critical for the artist to gather as much information on their subject as possible. Especially usefully to know are ethnicity, age and gender. If the skull is of a well-known person, like Richard III of England, then this information is probably already known.

But if it’s an unidentified specimen, an element of guesswork comes into play.

“There are three basic skill shapes that give you an indication of ethnicity,” explains Anderson. They are Caucasoid, Negroid and Mongoloid.

An anthropologist will then estimate the age of the person, which is fairly accurate up to the early 20s -after that the skull is fully grown and the evaluation becomes broader.

Regarding gender, there are a few cues to look out for such as the brow ridge size, the angle of the chin, and the mastoid complex, which is behind the ears. A large complex indicates a male.

When National Geographic asked Anderson to reconstruct a face, they didn’t tell him it was Tutankhamun—they wanted his blind analysis. “He had a very feminine looking skull, he didn’t have large eyebrow ridges like most males,” says Anderson, “I was almost going to reconstruct it as a female.” It just goes to show that for some skulls, it can be a tough call to make if you don’t have the historical context of the specimen.

Using the gathered information, the artist will choose a set of predetermined skin depth datasets. For example, if the specimen were a 55-year-old Caucasoid female then Anderson would use the skin depth of the average white middle-aged woman when he sculpts her face.

Some reconstruction artists would rely solely on the skin depth data to overlay a precise amount of plasticine over the skull. However, others like Anderson use it as more of a secondary guideline.

“I really look at the skull and you can see how it’s supposed to be,” says Anderson, “I’m dubious of skin depth data, because it isn’t great.”

Before adding the layer of skin-like plasticine, he sculpts plasticine muscles, fibro-fatty pads, and fat and glandular tissue. He then overlays it all with a thin layer of plasteline skin, which is a type of non-hardening modeling clay. When all that is done, Anderson goes back to check if what he’s done matches up with the skin depth data. If not, he’ll use his best judgment, but usually defers to the anatomy he constructed over the prescribed skin depth data.

Now comes the time to add things like eye, hair, and skin color. If there are old portraits of the person then the artist will use that. Otherwise they’ll go with the most common selections — brown hair, brown eyes. Skin color would be chosen based on the skull shape, although there are still considerable variations in skin color for each racial type, so it’s really just a best guess.

The process is slightly different for Mullins when he reconstructs a skull that the police hope a member of the public might recognize. Rather than guess, he prefers ambiguity so as not to discount a potential identification. “Advances in DNA may soon lead to improvements in determining skin tone and eye color but for now it’s best to do images in black and white,” he explains.

The finished product is then cast in a silicone mold to make it look more lifelike.

After all this time, how accurate is the end result? Mullins says he measures success by whether or not someone recognized his reconstruction when the image flashes on the evening news. “They are the ones that saw something in the reconstructed face that made them pick up the phone,” explains Mullins.

For him, it doesn’t need to be a 100 percent match with the victim, but rather enough to strike a resemblance worth calling in.

Anderson has seen a lineup of several reconstructions of the same skull, which he says makes you realize a finished face all depends on the artist. So, do we know what Tutankhamun or Rickard III looked like for sure? Maybe not, but we have a pretty well educated conjecture.