Skip to content
Homepage ARTICLES How Do The Stars Line up? 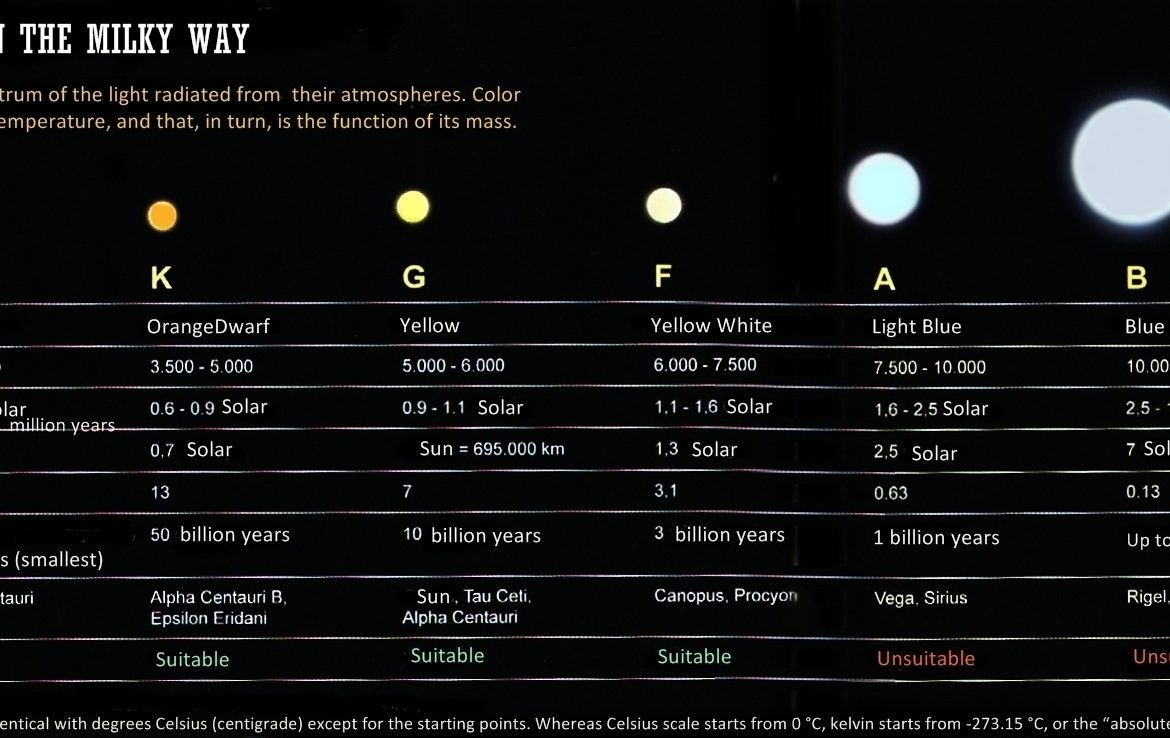 How Do The Stars Line up?

Stars are divided into spectral classes from large to small according to their masses, and consequently, their luminosity and the characteristics (spectrum) of the light they emit. Those having the largest masses and have to burn the fuel at their cores much more intensely to support them, and therefore  the ones with shortest lives (from a few million to 100 million years) are “blue” stars of  O and B classes. O class behemoths can pack 16-100 solar masses, while those which make up the still-hefty B class can be anywhere between 2.5 and 16 solar masses.

Next category groups A class “white” stars at 1.6-2.5 solar masses. These can live for about 1 billion years.

They are followed by the F class “yellow-white” stars of 1.1-1.6 solar masses with lifespans of about 3 billion years. Large-mass stars falling into these four categories are extremely rare. Altogether they account for only 3 percent of  the entire star population of the Milky Way.

Next in line is the G class “yellow” stars, the Sun being one. The ratio of the  Sun and its likes in the star population is about 7 percent. The Sun is estimated to have a lifespan of 12 billion years. So, our 4.5 billion-year-old star still has a long time to go.

Then come the K-class “orange dwarf”  stars, slightly less massive than the Sun (0.6-0.9 solar) and cooler, but with longer lifespans (up to 50 billion years.) About 13 percent of all stars in the Milky Way are from this class.

Bringing up the rear in the classic line-up are the “red dwarf” stars of  0.08-0.6 solar masses. Being the most common, they make up 76 percent of all stars. The smallest of these may live up to 100 trillion years.

Stellar classes are divided within themselves into subgroups, ranging from 0 (hottest) to 9 (coldest). Hence a line-up from hot to cold goes like… A8, A9, F0, F1, F2 … Additionally, Roman letters indicate their position in the process of stellar evolution. I defines supergiants (bloated O and B stars near the end of their lives); III, expanded, giant phases of  stars with solar or similar masses towards the end of their lives ; V, the stage of stable equilibrium called “main sequence” in stars’ lives during which they fuse the hydrogen in their cores to helium; II, bright, giant stars; IV, the Sun-like stars which have left the main sequence but not yet evolved into “red giant” phase; VI,  objects of sub-stellar mass (brown dwarfs); and VII, the “white dwarfs” which are the  hot, dense cores of dead Sun-like stars.

The image taken by the Hubble space telescope of the Sirius system, one of the most luminous objects in the night sky. The binary system is composed of Sirius A (the bright star at the center) which is an A class star and Sirius B which is a white dwarf (small spot at lower left). Sirius A has been over exposed to reveal Sirius B. Concentric rings and the halo around Sirius B are effects of lenses.

“Stars" which are not stars

White dwarfs: When the Sun and stars of slightly higher or lower mass convert all of the hydrogen in their cores to helium through fusion reactions, the core, filled with non-burning helium “ash” and unable to produce energy, begins collapse and heat up. As the collapse causes a flow of hydrogen from outside layers, a shell around the “degenerate” core (unable to contract further because the electrons cannot clump together) begins to fuse hydrogen furiously, causing the outer layers to heat up and expand, increasing the star’s size hundreds of times, turning it to a “red giant.”

But after the core fills up with carbon and oxygen, same process starts again with non-burning core contracting and produced heat triggering helium fusion in a shell above the core, which, in turn, triggers hydrogen fusion at another shell above it.

The outer hydrogen envelope heats up again and expands and the star becomes a red giant for a second time. The vastly inflated tenuous envelope is gently blown into space as a “planetary nebula” and the hot, contracted carbon/oxygen core, containing up to 60 percent of the star’s original mass, but shrunk to the size of Earth,emerges into open as a “white dwarf”.

Since the core, unable to collapse further because of the pressure of the electrons which cannot come any closer (degenerate electron pressure) because of a physics law called Pauli exclusion principle barring two matter particles  from occupying the same quantum state (energy level),  glows with the heat gained during collapse at 100.000-150.000 ⁰C, these dead but luminous objects are sometimes called white dwarf “stars”.

Divided into several sub-classes according to the contents of their bodies and atmospheres, white dwarfs shed their heat at very long periods and become cool “black dwarfs”, which no longer radiate light and therefore are invisible.   But since this cooling process exceeds the age of the universe which is 13.8 billion years, no black dwarf has formed yet. Even the oldest existing white dwarfs are currently radiating at 6-7.000 ⁰C .

Another misnomer is “brown dwarf”, which came to be used for spheres of gas which do not fit the definition of a star because they are not massive enough to start fusion reactions at their coresand are stuck in between the highest-mass gas giant planets and lowest mass red dwarf stars. Their name notwithstanding, they are not brown. Astronomers say they will appear to human eye in a scale of  colors from dark red to mauve and purple.

The masses of brown dwarfs range from those of largest gas giants to 80 Jupiter masses.  Their temperatures, which drop to a few hundred degress in the smallest ones, come from thermal heat caused by the pressure of their masses. Like the white dwarfs, they are supported against collapse by the degenerate electron pressure.

Although they lack the mass to start hydrogen burning, those larger than 13 Jupiter masses are thought to fuse deuterium nuclei at their cores. Besides a single positively charged proton (which is actually the nucleus of a hydrogen atom,) the nucleus of a deuterium, which is a heavier version of hydrogen, also contains a chargeless neutron. By partly masking the positively charged protons from each other and thus reducing the strength of the electrostatic repulsion between them, this neutron  allows deuterium  nuclei to fuse more easily, compared to hydrogen nuclei (protons) which repel each other far more strongly.  It is believed that brown dwarfs of  over 60 Jupiter masses, also fuse lithium.

In recent years, brown dwarfs were seen to be added to stellar classification tables, lining up from large to small as L, T and Y classes according to certain characteristics. These are envisioned as highly exotic objects, with liquid iron raining from the atmosphere to the surface of some.